Practicing Poverty is my attempt to encourage you to prepare for a future where “regular” people will be routinely locked into their homes, quarantined, and experiencing the “Great Reset” by practicing poverty.

By regular people, I mean you and me.

Most of the world was forced to practice poverty over the last 18 months.  Some places around the world, especially Australia, are still locked down beyond anything reasonable.

Since we can’t be sure what the future holds, we better get ready. Practicing poverty will help you prepare for the time when we’re living paycheck to paycheck and we’re just trying to survive.

“According to the research, 54 percent of consumers in the U.S. (125 million U.S. adults) are living paycheck-to-paycheck, with 21 percent of this population struggling to pay their bills, meaning they have little or no money left over after spending their income.”

I’ve known a few responsible people during my life who managed to save money, but I’m not one of them.

If you want to make sure that you have no assets, all you need to do is have three divorces.

I can guarantee that you will not have anything left over to invest.

For many people, we are already practicing poverty, we just don’t know it yet.

Financial anxiety has been a concern since the beginning of recorded history.

Seneca the Younger (in Lucius Annaeus Seneca) was a Roman Stoic philosopher, statesman, orator, and one of Rome’s leading intellectuals.  Seneca was also a tutor and advisor to Emperor Nero. 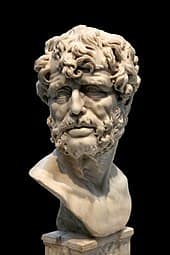 About 2,000 years ago, Seneca talked about the crippling effects of economic uncertainty.

Practicing poverty is an exercise to demonstrate how worrying about money for superfluous consumption is a waste of life.

He pointed out that our financial fears seem to be overblown and relatively removed from the reality of most of our actual economic situation.

“It is precisely in times of immunity from care that the soul should toughen itself beforehand for occasions of greater stress, and it is while Fortune is kind that it should fortify itself against her violence. In days of peace the soldier performs manoeuvres, throws up earthworks with no enemy in sight, and wearies himself by gratuitous toil, in order that he may be equal to unavoidable toil.” ~ Seneca 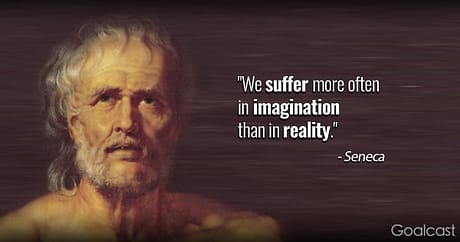 While others are living in a state of fear, you can enjoy a life of peace and clarity. Much of that clarity and peace comes from letting go of material goods and tapping into your inner Buddha.

Retrain your mind to prepare for the future.

However, when the Great Reset hits – and it will in one form or another, the pain will be immediate and real.

As Americans, we’ve gotten very soft over the last 50 years.

Even though we’ve had some recessions in the past, nothing will be like the Great Reset.

Even today, workers who have planned well and accumulated more cash than they can realistically spend in a lifetime can’t get past the dread of moving from accumulating assets to living off them.

We humans are more averse to loss than we are motivated by gain. Once we have something we find it hard to give it up. We would rather give up the acquisition of more and better things than to give up what we already have.

We intrinsically harbour a pride of ownership over the things we’ve worked to attain. There’s even a term for it. The Ikea Effect.

This is defined as the “cognitive bias in which consumers place a disproportionately high value on products they partially created.”

We become emotionally attached to our possessions, while letting go of possessions is a major aspect of many religions, including Buddhism and Jainism.

The things you own do not “define you.” You define you. How you treat yourself and other people defines you. Let go of the physical stuff and hold on to your core nature.

Practicing Poverty teaches you how to live in poverty in an uncertain future.

With the threat of nuclear warfare, economic downturns, and natural disasters, Practicing Poverty is the answer. It teaches you how to save money, grow or source your own food, and preserve resources, so that you’re ready when the time comes.

Practicing Poverty is the best way to prepare for the coming global catastrophe.

For many of us at this point, preserving assets is our only option. We don’t really have enough time to grow our own food right now, at least most of us don’t.

In fact, I’m not sure that owning land is the best strategy for most people.

Seneca was a Roman philosopher who lived in the first century. His work included essays, poems, and tragedies.

He’s not just thought of as an extraordinary philosopher, but also as a successful tragedian, which is a rare combination.

Seneca was a Roman philosopher and Stoic. He lived at a time where social illness was rampant and the ruling class was more interested in self-protection than social responsibility.

We will summarize the life and teachings of Seneca and how they can be applied to the modern day. We will also examine the question of whether the conditions of the Roman Empire were similar to the challenges of our own society.

Practicing poverty may go against the image of the American dream, but it’s an important way to prepare for the coming Great Reset. You can practice poverty by buying less, owning less, and living more simply.

“Appoint certain days on which to give up everything and make yourself at home with next to nothing. Start cultivating a relationship with poverty. For no one is worthy of god unless he has paid no heed to riches. I am not, mind you, against your possessing them, but I want to ensure that you possess them without tremors; and this you will only achieve in one way, by convincing yourself that you can live a happy life even without them, and by always regarding them as being on the point of vanishing.”

This is all about practice to get ready for the future.  Instead of acquiring more stuff, keep money in reserve for the hard times or to be able to move to another location anywhere in the world that better fits your lifestyle.

It doesn’t mean you have to practice poverty forever.

Unless you want to.

Experimenting with poverty is not the same thing as living in poverty.

A person with resources and prospects can never know the hopelessness of the truly impoverished. I don’t minimize the plight of people who are indeed in poverty.

But practicing poverty will help you prepare for the Great Reset and future lockdowns and recessions, as well as those ongoing restrictions in places like Australia, New Zealand, Cambodia, and the Philippines.

Following in the footsteps of stoics like Seneca, we need to practice poverty to prepare for future lockdowns, quarantines, recessions, and the Great Reset. This means not only living in the present, but also in the future.

Practicing poverty helped me realize that no matter how bad things became, I could thrive on but a fraction of what I had become accustomed to.

You don’t want to be unprepared for when things get worse.

There were several reasons for this, but the ones that resonated with me were to remove fear of being poor and to practice being resourceful.

You don’t want to be unprepared when things get worse. Practicing Poverty is a no-cost, low-impact way to practice poverty now, when things are still good.

Seneca, one of the most influential men of his time, realized that most fears have crippling effects upon us and devised a way to help overcome them.

One of his techniques, what is now known as “negative visualization,” is to imagine worst-case scenarios and realize that, although undesirable, we would find ways to persevere.

We imagine we have lost our spouse, our house, our car, our job, and anything that we place value on.

In practicing these visualizations, we focus our thoughts on appreciating the things we have. We appreciate our spouse, our house, our job and friends more. This practice prepares us for the worst.

This technique blunts our fears and robs them of their power. When it came to financial worries, he took it a step further, and physically practiced living with scant resources, what modern stoic scholars call “practicing poverty, even though Seneca did not use that exact phrase.

Add this to memento mori, and you are humble to the core.

Memento mori is a Latin phrase meaning ‘remember you must die’. . In addition to the symbols of mortality, these may include other worldly pleasures and goods.

When you contemplate your death, there is nothing to fear from poverty.